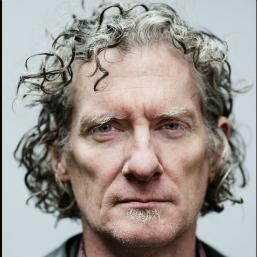 Whoever it was who decided that Americans don't have any sense of irony, they forgot to tell Dave Fulton. This wry Seattle wag is positively brimming over with ironic invective. He even fronted an amusing and perceptive report - for Newsnight, no less - begging Brits to celebrate their own heritage, rather than aping American pop culture.

Yet you'd never know from the look of him. With his stringy beard, straggly long hair and rock 'n' roll black leather jacket, Fulton looks more like a refugee from a defunct British heavy metal band than an all-American stand-up... there's a salty flavour to his live club set that you'd scarcely describe as feminist. It's these contradictions that make Fulton so fascinating, and fun to watch, especially when he's riffing with British punters half a world away from home.

Dave Fulton is opinionated, isn't afraid to pull punches in his observations, yet has a deceptively laid back stage manner that disguises a raw aggression. A varied melting pot of issues that sometimes even he doesn't want to explore. This is un-missable comedy from one of the most dynamic and innovative comedians breaking on the comedy circuit at the moment. His mother would never have thought it possible from someone who holds a Masters in Music Composition.

Recently he's been seen on the BBC series The Stand Up Show, and Channel 5's The Comedy Store series where he took the roof off the prestigious club with his highly inventive perspective on life. Dave has also presented a feature for Newsnight on American culture to tie in with an exhibition at The Barbican.

"Compelling... a real breath of fresh air" - The Independent