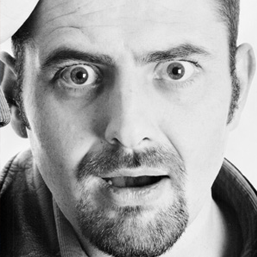 David Hadingham has been a professional comic since May 1996. Intense and anecdotal, David keeps audiences hooked right up to the last punchline as he presents his unique and often warped view of everyday life. This gravel-voiced comic combines supremely controlled delivery with inimitable facial contortions as he cracks some of the best handmade gags in the business.

David is a highly-regarded regular on the nationwide comedy circuit. He has headlined the following clubs: The Glee, The Hyena Cafe, Lee Hurst's Backyard, Up the Creek, Komedia, Jesters and The Stand. David also plays the other main venues including Jongleurs, Bearcat Club, Banana Cabaret, The Comedy Cafe, Bound & Gagged, Standing Ovation, Rawhide and Buzz.

A unique style; combining his psychotic tendencies with charm, naiveté and wit