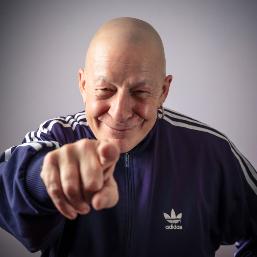 "It should be made law that every British Citizen must go and see Jeff Innocent. He's that funny." Evening Standard

'I was always connected. I still get invited to the funerals, if you know what I mean'. From London's East End, Canning Town, Jeff Innocent grew up the son of a real-life villain and could have chosen a career in the family firm. Instead he worked in the 70s as a window dresser in London's fashionable Kings Road & Carnaby Street for a smart chain of boutiques and at night was moonlighting as a DJ popularizing Jamaican music. By the 80s the retail industry had lost its charm and it was time for a new challenge. Jeff enrolled at University to study for a BA in Cultural Studies and stayed on to complete a MA in History & Philosophy, before finally answering his true calling 10 years ago and taking to stand-up.

Jeff is now very much part of the comedy gentry and widely acknowledge as one of the Uk's top headlines acts and comperes. He has stormed comedy clubs all over the world including Singapore, Hong Kong, The Philippines, Dubai, Holland, Taiwan and more recently Japan.

Jeff's film credits include the role of a publican in 'It Was an Accident' and he played a prisoner in 'Mean Machine' alongside Vinnie Jones.

In 2006 Jeff made a welcome return to the Edinburgh Fringe with his solo show 'Eco Worrier' . The show received rave reviews and also highlighted a few important ethic issues too.

A prolific writer, Jeff has written for The Independent and The Scotsman and contributed to the book 'Sit Down Comedy' (published by Ebury Press). Jeff is currently researching a documentary for radio and working on several TV projects including a new sketch show for Sky 1.

It Was an Accident, with Chiwetel Ejiofor (Publican) Mean Machine, with Vinnie Jones (Prisoner)

The Stand Up Show (twice for BBC1)