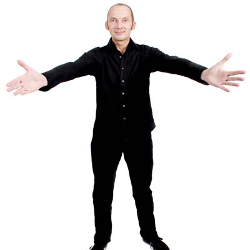 As an act or compere, Jeremy mixes sharp one liners with friendly story telling and sparkling off the cuff wit. His cheeky smile and friendly nature have endeared him to audiences all over Britain and as far a field as Berlin, Bahrain, Paris and Zurich.

Jeremy has a reputation for reliably strong performances at major comedy clubs nationwide including Jongleurs and The Comedy Café. He also tailors his act for regular corporate shows. Jeremy is currently working on a pilot show for Channel 4.

“Best act of the night, by far, was Jeremy O’Donnell. Cutting edge funny” The Daily Mirror

“Best English comedian we have had” Blue Monday club, (Berlin)