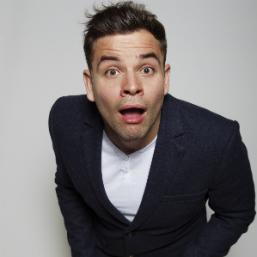 Joe Rowntree is a stand-up comedian, actor, writer and presenter. He graduated from Goldsmiths College in 2003 with a BSc Hons in Psychology. His television career started back in 2001 writing put-downs for Anne Robinson on "The Weakest Link". He has hosted 2 UK tours of "Brainiac Live" which culminated at the Hammersmith Apollo after appearing in all six series of the award-winning hit Sky 1 show "Brainiac: Science Abuse" and recently recorded "Dave's One Night Stand" (Dave), which he was a huge hit on!

In 2013, Joe performed his first character show: Joe Rowntree is a Bit of a Character that received very warm reviews. In 2014 he returned to the Festival with his brand new character act, Morgan Berry: Pet Bereavement Counsellor and received glowing reviews including four stars in Chortle. In 2015, Morgan Berry returns to Edinburgh as part of his first UK Bereavement Tour with Morgan Berry: Watership Down. For more information you can visit Morgan’s website www.morgan-berry.com

Joe performs at the most prestigious and reputable comedy clubs across the UK and International comedy circuit including:

to name a few!