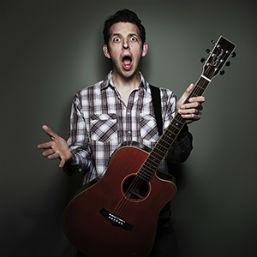 Jonny Awsum exploded onto the professional comedy scene with a crowd-pleasing set that's seen him perform his special feel-good brand of musical comedy around the world. He's a comedic whirlwind, and has risen quickly from a fresh faced newbie to a highly sought after headline act.

Jonny has been traversing the UK and indeed the World, armed with an impressive arsenal of jokes and his trusty guitar. He's a must for comedy clubs, as his crowd-pleasing set sees Jonny regularly ending his sets to standing ovations and demands of an encore.

Jonny has performed internationally from Cyprus to Slovakia, Austria to Hong Kong - his feel-good set has captivated audiences at every kind of venue from tiny to large comedy clubs, playing to our Armed Troops abroad, at nationwide theatres as part of TV's Master Baker Paul Hollywood's Tour, to sell-out runs at the Edinburgh Fringe over the last two years, with his hit shows 'Jonny Awsum's To Do List' and 'Sexy Noises'.

Jonny's comic talents have also been sought by private clients with corporate work including hosting for Harley Davidson, Polydor Records and Freixenet. Jonny has also enjoyed a taste of stadium work, fronting the main stage at the Silverstone Classic, He also has experience of warming audiences up at some of the biggest television shows in production, including Big Brother and Loose Women, helping Jonny develop a winning style.

Equally at home in front of a camera, Jonny has recently appeared on the nation's TV screens, presenting for Sky Sports, is a familiar face from the current Experian adverts, and features in the Cravendale 'Cats with Thumbs' campaign, which has been viewed over a million times on YouTube.