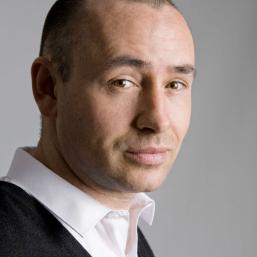 Mike Squeaky McClean is probably best known for presenting the Big Breakfast on C4 , The roving reporter for Richard and Judy for 7 years as well as presenting a whole host of television shows for the BBC , ITV , C5 sky1 and Nickelodeon .Mike also appeared in the office Xmas special with Ricky Gervais , as an actor he played Father Tony in Shameless, and Fins Dad in My Big Fat Diary .

After leaving college Mike gravitated towards stand-up comedy and quickly broke onto the circuit with a comedy magic act. He was soon spotted by a TV producer from Nickelodeon and went on to front several shows for the channel, including “Nick AM”, a live daily breakfast show. He later joined ITV to present the kids game show “It’s Not Fair”, followed by 2 series of “Mad for It”, a live children’s show, he devised, for ITV. Mike moved to Channel 4 and joined “The Big Breakfast” where he was soon waking up the nation, knocking on punters doors and interviewing some of the biggest stars, including Julia Roberts, Brad Pitt, Britney Spears and many bands of the day.

After “The Big Breakfast”, Mike continued to work for Channel 4 as the roving reporter on “Richard & Judy”, a job he loved and excelled at for six years. During this time he also presented “House of Games”, a family entertainment show for Challenge TV.

He originally trained as an actor at the Arden school of theatre in Manchester, however having had enough of being a tree and spending hours learning how to breath which he does in his sleep, Mike gravitated towards stand up and quickly broke into the stand-up circuit with his very funny very clever Mind reading act.

Mike is one of the best and funniest Mind readers on the circuit and is always busy either on tour or traveling the world with his bizarre mind reading act. Mike remains lovable and down to earth individual who has stayed true to his comedy roots, His razor-sharp delivery has made him a favourite both on the circuit and in the corporate world.

If you like Derren Brown then you’re going to love Mike, he’s like him only cheaper and a little naughtier,Mike doesn’t have magical powers or psychic ability and neither does he ever work with stooges or plants to achieve his work. The unwitting participants on his show are entirely genuine and easily fooled.