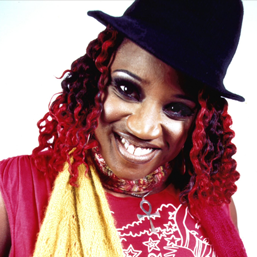 Ninia Benjamin is one of the UK’s hottest female comedians with a wealth of television, stage and live stand-up experience.

Ninia was catapulted to stardom as one third of BBC3′s 3 Non-Blondes, which later transferred to BBC2 and BBC America before going to a second series, shown internationally. From this, her talents have been showcased across all the major UK channels in a variety of roles, as a presenter, studio guest, actress and reality TV star. Ninia was crowned the Winner of Celebrity Scissorhands 2007 (BBC3) in which she and a host of celebrities cut and styled their way through two weeks in a televised salon, raising thousands of pounds for Children in Need. She was also a contestant on the hit Living programme, The Underdog Show in which celebrities were paired up with rescue dogs which they had to train in preparation for a number of obedience tests and she has made two hilarious appearances on BBC1′s Hole in the Wall. With an infectious sense of humour and effervescent screen presence, Ninia is a favourite guest and commentator for many popular discussion shows, for example Sky Comedy Close Up. Other recent television appearances include Total Wipeout and Celebrity Masterchef whilst her vocal talents can be heard in CBeebies’ Tinga Tinga Tales from February 2010.

A talented actress, Ninia appears in the Ricky Grover feature film Big Fat Gypsy Gangster as part of a cast that includes Omid Djalili, Ray Winstone and Danny Dyer and was released September 2011. Ninia is also an experienced theatre performer and has acted in a number of productions including Eve Ensler’s The Vagina Monologues at the New Players Theatre in 2009.

While Ninia’s popularity on television continues to soar, her stand-up remains at the highest level. She is a regular headliner at all the top venues across the UK , such as Jongleurs, Up the Creek, The Banana Cabaret, Glee Clubs and Bound & Gagged. She has also spread her talents overseas and has enjoyed a successful run at the Cape Town Comedy Festival in South Africa in addition to appearances at the ‘Big Night of Comedy’ festival in Holland .