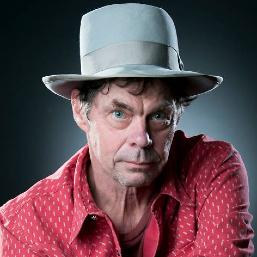 Rich Hall’s critically acclaimed grouchy, deadpan style has established him as a master of absurdist irony and the king of rapid-fire wit. The award-winning Montana native is renowned for his expertly crafted tirades and quick fire banter with audiences. This is a comedian who’s plain spoken growling indignation and acerbic observations have an unerring talent for hitting his targets with precision every time, leaving his audience hanging on every word winning him fans all over the globe. Hall has been described as a transatlantic messenger lampooning each country he visits with his common sense, and he is no less harsh to his homeland.

Rich is well known in the United States for appearing and writing on The David Letterman Show (1982-84) – for which he won two Emmy Awards. He was a writer and cast member on Saturday Night Live for the 1984 – 1985 season and he appeared a few times on Late Night with Conan O’Brien between 1994 and 2004. He was also a regular on Not Necessarily the News from 1982 -1990 and his famous ‘sniglets’ segment was eventually compiled into two books.

In 1998, Rich Hall created the character Otis Lee Crenshaw, a redneck jailbird from Tennessee, who has been married seven times, all to women named Brenda. A singer-songwriter, Otis writes bourbon-soaked, Tom Waitsian tunes and blends this with audience banter, producing a perfect fusion of music and comedy. Otis Lee Crenshaw charmed sell-out audiences each year at the Edinburgh Festival, throughout the UK, at comedy festivals in Australia including Adelaide and Melbourne and at London’s famous Comedy Store, where he had a monthly slot for six months. At the Edinburgh Festival 2000, Rich Hall as Otis Lee Crenshaw won the highly prestigious Perrier Award.

Rich Hall has always included music in his shows since the Otis Lee Crenshaw days and in 2010 he began bringing his talented band of musicians with him to Edinburgh, London, and everywhere in between for a mash up of music and comedy in his distinctive Hoedown show.

Other strings to his bow include being the inspiration behind Matt Groening’s character Moe Szyslak from The Simpsons as well as being an accomplished author, having released three books: Magnificent Bastards, Otis Lee Crenshaw: I Blame Society and Things Snowball, all released by Abacus Books. He has brought three plays to Edinburgh Levelland (2006), Best Western (2007) and Campfire Stories (2009). For TV, he’s acted in the ITV2 sitcom Cockroaches and in Comedy Central’s Drunk History UK and lent his voice to a character on CITV’s Thunderbirds Are Go. Hall has also released two very successful stand-up DVD’s in 2001 and 2009 through Universal Pictures UK.