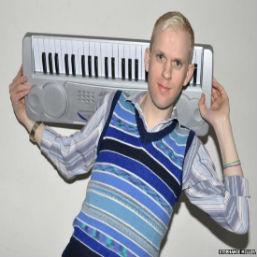 Since he first came onto the stand-up scene, as a finalist in the prestigious Hackney Empire competition, Robert has gone from strength to strength, and in 2010 won the Malcolm Hardee main award at the Edinburgh Festival. He now is a sought after act who regularly performs in big clubs, little clubs and those in-between around the UK and sometimes abroad. He is a versatile performer who does both musical comedy or straight stand-up and can MC, as well as having written for other comedians and for TV panel shows.

Edinburgh 2014 – The Curious Incident of the Gag and the Gun Crime: Robert White killed with this show, matching an amazing presence to clever jokes and pitch-perfect delivery…… he hides behind a keyboard, constantly twitching and fiddling with the mic stand or the knobs and dials on his board as he expertly jingles his way through his act. Musical comedy is so frequently hit-or-miss, but here the music is an accompaniment to White's nicely written gags, delivered with an acute sense of timing…..He plays the keyboard beautifully, with the lyrics far from beautiful. But he garners serious rounds of applause and howls of laughter. He caters the songs directly to people in the crowd, and most of the front row get a mention more than once…..At one point he commented repeatedly on the laughter as it moved around the room, describing each individual’s laugh and how it infected others. It is uncomplicated and obvious, yet we can’t help but get caught up in it. He never lets up, his sharp humour moving with the flow. Super-fast quips follow any piece of information gleamed from the willing audience. Simple puns and what should be cheap gags are lent gravity simply by the carefree and confident torrent of his humour. Just brilliant. - CHORTLE ****

‘Robert White is an extraordinary talent, or maybe an extraordinary person. Maybe both…… rude songs, appalling puns and outrageous jokes all delivered by a bloke who looks vaguely reminiscent of Tintin. White, of course, gives us about a dozen minority groups for the price of none. ….. mildly terrifying, but very funny……His seemingly endless running commentary on audience reactions is quite brilliant, taking the room right to the edge of a primal scream and then dropping us in an exhausted heap……White also has an impressive ability to improvise songs. He plucks rhymes from the air with relentless accuracy, never missing a beat. This is a show you really should see.’ - Kate Copstick Aug 2014

‘It’s his nervously effervescent delivery – a gushing stream of puns and musical stings, transmitted through the static interference of his twitchiness – which is what makes him stand out.....a good punster, and a talented improviser, able to ad lib a song in response to a minor audience disturbance ...... the jumpy energy of the set is compelling.’ - Steve Bennett CHORTLE

'Robert White is a ball of comedic energy so sharp and expansive you could almost feel the static crackling through your hair. His set comprised of musical excerpts, improvised composition and sounds and harsh comedic superlatives. His sweet, sincere appearance is in sharp contrast to the deluge of perverse wordplay and hilariously disgraceful insinuations. He is like the South Park character of stand up, appalling and shocking from beneath his blond hair and beautiful boyish looks. His absence of the slightest quiescence kept the audience on their toes in thorough entertainment. With his quick intelligence and child’s penchant for mayhem, his material and performance are extremely funny, shocking and original. He’s a spark amongst the daunting circuitry of the comedy hard drive. Fantastic!' - BBC