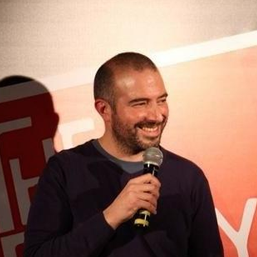 "the best voice merchant on the circuit is Paolini, who has done some TV but is destined for far wider exposure" Evening Standard 2003

Since receiving the runner-up accolade in Channel 4's So You Think You're Funny Award 2001 and in BBC's New Comedy Award 2002, Stefano has had a constant stream of TV and radio work, which he manages to juggle with gigging 4/5 nights a week.

On radio he has appeared as a special guest on DEAD RINGERS (BBC Radio 4). He voiced a variety of characters in the DREEM TEEM XMAS PANTO (BBC Radio 1 - two specials) and on TALK RADIO he appeared in five episodes of DO YOU LOOK LIKE HIM OR WHAT, which he also wrote. He has guested on LOOSE ENDS (BBC Radio 4), THE JO WHILEY SHOW (BBC Radio 1), LBC and BBC London . More recently he featured in THE PROBLEM WITH ADAM BLOOM (BBC Radio 4), SPANKING NEW (BBC Radio 7) and THE MILK RUN for BBC Radio 1. He is currently developing his own series 'BRITALIANS' for BBC Radio 4.

"A remarkable repertoire of voices and sounds" - The Stage, August 2002