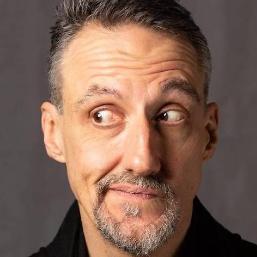 Hughes first tried comedy in 1994, shortly after having joined the band Nazxul, and started performing at The Comedy Store in Sydney.

Hughes quit Nazxul and left Australia for Ireland in 1999, living for a time with members of the band Primordial, then moved on to London, then on to Manchester where he stayed in a house with fellow Aussie comic Jim Jefferies before finally settling in Manchester in 2002.

Hughes' early comedy was influenced by Bill Cosby and the works of Woody Allen, particularly his books Side Effects and Without Feathers as well as a 1965 recording of one of Allen's stand-up shows that Hughes had owned on audio cassette. Hughes has also cited having been influenced by the comedy of Richard Pryor, Dave Allen, George Carlin and Eddie Murphy. Hughes' comedic style has also been influenced by the political and subversive humor of Bill Hicks, as well as the spoken word performances of musicians Henry Rollins and Jello Biafra.

Hughes is known for maintaining his heavy metal look during his stand-up performances. Hughes has worn his hair long for much of his comedy career and also sports a goatee. He often wears all-black, including a leather jacket, concert t-shirt and jeans.

Hughes comedy sets often contain social commentary including criticisms of political correctness, religion, war, drug laws, health and safety policies, colonialism, corporate capitalism, and technology. Hughes' humor also touches upon topics of a spiritual and philosophical nature. He is also known for discussing ideas in the conspiracy theory realm, although he refers to himself as a "conspiracy realist" and adopted this title for one of his comedy tours in 2011.

Hughes' stand-up has been featured on television shows such as the BBC series Michael McIntyre's Comedy Roadshow in 2009 and Live at the Apollo in 2011. He also appeared on The Comedy Channel's Cracker Night in 2010 and in 2011 he appeared on the Channel 4 series Stand Up for the Week.

After touring non-stop for four years and averaging more than 150 shows a year, Hughes took a break for health reasons. During this hiatus he quit both drugs and alcohol cold turkey and cut his long hair short. He returned to the comedy stage in 2014.