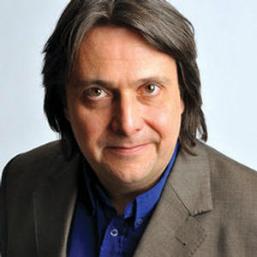 Scottish comedian ALAN FRANCIS first came to the notice of comedy audiences when he won Channel 4's So You Think You're Funny Award in 1991. Since then his reputation has grown as a writer, stand-up and actor.

His diverse acting roles include the award winning play PENETRATOR at the Royal Court and Traverse Theatre. In 1995 he co-wrote and co-starred in JEFFREY DAHMER IS UNWELL at the Edinburgh Festival. The play was critically acclaimed and transferred to the Hampstead Theatre in London. He appeared in MISS CONCEPTIONS at the1996 Edinburgh Festival and has completed successful runs in both THE BEST OF SCOTTISH COMEDY and THE BEST OF SO YOU THINK YOU'RE FUNNY? In 2002 he presented his one-man show CLOBBERED (a black comedy) at the Edinburgh festival where it received rave reviews. Last year he appeared in TAKE A CHANCE ON ME (A New End Hampstead Theatre Production).

On television he continues to work as a writer/performer on ALISTAIR McGOWAN'S BIG IMPRESSION (BBC 1 - 4 series). The show won Best Entertainment Show at the British Comedy Awards 2000. Other television includes SPY TV, FIST OF FUN, BETWEEN THE LINES, the Alan Partridge Christmas Special KNOWING ME, KNOWING YULE, THE ALEXEI SAYLE SHOW, and ALAS SMITH AND JONES (all BBC), FUNNY FARM (STV) and BBC Scotland's PULP VIDEO, COMEDY NATION (BBC), for which he also wrote and LENNY GOES TO TOWN (BBC), THE 11 O'CLOCK SHOW (Ch4) and STAND-UP (BBC). Most recently Alan appeared in THE LAST LAUGH... (BBC).

On radio Alan co-starred on THE ALAN DAVIES SHOW (Radio 4), which was nominated for the Best Radio Show at the 1998 British Comedy Awards. He has also contributed to ALAN'S BIG ONE FM (Radio 1), THE TREATMENT (Radio 5), THE BUZZ (Radio 4) and two series of SLICES OF LIFE WITH PHIL JUPITUS (Radio 1). He co-wrote and starred in radio 5's Sony Award nominated COLIN.

Alan appeared in the feature film, THE DEBT COLLECTOR (now on general release) and in 2000 he supported RHONA CAMERON on her UK tour.

He's just finished co-writing BIG IMPRESSION EURO 2004 with Alistair McGowan and Ronnie Ancona. As an actor he was in ANIMAL HOUSE (on Sky 1) and THE WONDERFUL WORLD OF DISSOCIA, directed by Anthony Neilson's. He also wrote and presented a 45 minute factual entertainment show for BBC Radio 4 called STAMP COLLECTING WITH LEGS.

What the press said about 'Clobbered'

"the beautifully observed performances captures all the manic ambivalence of a Hello Magazine culture." THE TIMES