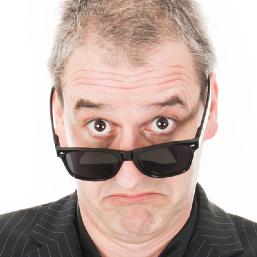 Boothby Graffoe (born James Martyn Rogers on 20 October 1962), is an English comedian, singer, songwriter and playwright. He is particularly known for his surreal sense of humour and work with Canadian band Barenaked Ladies.

Graffoe often incorporates guitar playing into his stage act, through his oddball (and usually slightly twisted) songs, including such titles as “Planet Dog”, “Woof” and his album’s title track, “Wot Italian” (sometimes referred to as “Umbrella Head Boy”). Some of his song titles are still more surreal, in that they do not reflect the subject matter, such as “Giraffes Don’t Play Harmonicas, So It Can’t Be a Giraffe” and “The Consequences of Living in a Container”. He is currently accompanied by the violinist Nick Pynn, having previously toured with acoustic guitarist Antonio Forcione.

He explained his reasons for increasingly irrelevant song titles as — essentially — ways to avoid giving away the key phrases or punch lines in his songs. For instance, he renamed “Umbrella Head Boy” to “Wot Italian” after realising that audiences familiar with his work would ask him to “Play Umbrella Head Boy”, thus rendering the surprise element of this line in the song redundant to others.

In 2005 he participated in the Danish stand-up tour “Stand-up DK|UK|OK” with Danish comedians Rune Klan, Carsten Eskelund and Geo, this went on tour around Denmark and was never released on DVD.

On a tour of Scotland in February–March 2007, Graffoe announced his intention to retire from stand-up comedy and concentrate on writing for Omid Djalili. He subsequently toured as a warm-up act for Djalili and Barenaked Ladies, but has recently announced a new tour and album (Songs for Dogs’ Funerals). He is a regular performer at the annual Edinburgh Festival Fringe.

Graffoe has won several awards, including the 2002 Adelaide Fringe Award for Excellence, and the Time Out Comedy Award. He has been nominated for British comedy’s prestigious Perrier Award.