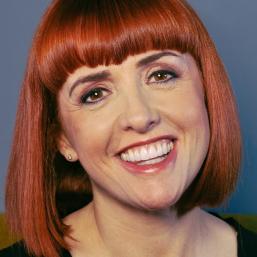 It was while working for Comedy Central, on the road with the late, great Joan Rivers, that Cally was nudged into the sphere of performance. Acting as an unofficial business event warm-up for Ms. Rivers, it was she (then 81) who told Cally she had what it took to be a stand-up; and so, as a 45 year old single parent, Cally first took to the stage. She has since become one of the UK’s most-booked professional comedians, with her unflinching, acerbic and intelligent brand of comedy. Cally’s TV and radio appearances include being a regular panellist on BBC’s QI as well as The Apprentice You’re Fired, Radio 4’s Museum of Curiosity, The Unbelievable Truth and Saturday Live. She is a frequent guest and commentator on BBC 5 Live, BBC Radio London and Times Radio.

Cally’s Edinburgh 2019 show ‘Invisible’ was a sell-out hit, receiving 4-star reviews and ‘joke of the fringe’ picks in the national press. Her debut solo show ‘Super Cally Fragile Lipstick’ in 2017 also sold out and was picked as Best of Fringe by The Arts Desk. Her 2016 show, ‘Cat Call’, with comedy partner Catherine Bohart, received a Malcolm Hardee Award.

In Spring 2021, Cally launched Namaste Motherfuckers, the only podcast where the worlds of comedy, self-help and business collide. With the help of celebrity guests and experts, Cally gets to the stories you’ve never heard before – uncovering not your normal life lessons, but some big ones nonetheless.

Drawing on her vast experience, eclectic life and unique wit, she is able to strike the perfect balance of smart, insightful, and entertaining. She is a gifted host and MC, with a natural ability to work a room, and gives sharp, inspirational and thought-provoking keynote and after-dinner speeches. Cally has a hard-won skill set few comedians can boast and has worked with – to name a few – Deutsche Bank, Sony Pictures, IMG, Endemol, Channel 4, Hat Trick, ScreenSkills, Women in Film & Television, UCL. PWC, Aviva, Sky Television, L’Oreal, Lloyds, Wella, Capgemini and Disneyland.