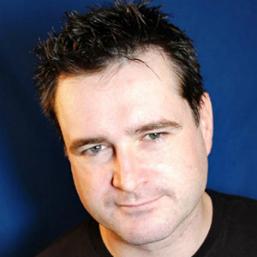 Scottish comedian and impressionist, GEOFF BOYZ "has established himself as one of the most versatile comedians on the London Circuit" ID MAGAZINE

In 1995 and 1997 Geoff hosted BEST OF SCOTTISH COMEDY at the Edinburgh Festival and in 1996 made his solo debut at the festival with a superb one-man show. He was a regular compere for The Best of the Fest at the 1997 Festival and the following year his show NOISE AND OTHER ANNOUNCEMENTS had a successful run at The Assembly Rooms in Edinburgh.

Geoff has also worked as a warm-up for television. Recent shows include THEY THINK IT'S ALL OVER (BBC 1), DEAD RINGERS (BBC 2), JACK DEE (BBC 1) and MR CHARITY (BBC 1).

Geoff has guested on numerous radio shows. He also featured on GLORIA UPSTAGED and appeared in two series of RED DEVILS and FANTASTIC VOYAGE (all for BBC Radio). He co-wrote and starred in the BBC Radio 5 series COLIN and was the hit act on Radio 2s THE STAND UP SHOW.

His theatre credits include THE ELECTRONIC DARK AGE, NOISE AND OTHER ANNOUNCEMENTS, WHY? GEOFF BOYZ and GEOFF BOYZ LIVE 2002 (all at the Edinburgh Fringe).

Geoff continues to be in demand on the corporate circuit and last year performed at the Scottish Sports Personality of the Year Awards. He recently undertook a new marketing campaign for Whyte and McKay and a second promotional tour with Johnnie Walker.

Geoff has performed in numerous countries all over the world, including Indonesia, Hong Kong, Singapore and Dubai. Last year he was one of the first British comics to perform in China. More recently he signed a development deal with Celador (the makers of Who Wants to be a Millionaire) for a new game show called What Ever Happens I Hate You.

"His demeanour is tense - his delivery explosive" SCOTLAND ON SUNDAY