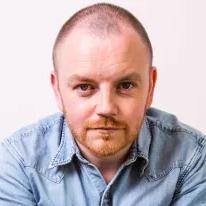 “Great timing, great presence and punchlines. A much needed fresh comic voice from Northern Ireland at a time when we most need to hear it.” – Jarlath Regan (An Irishman Abroad Podcast)

After nominations for the illustrious BBC New Comedy Award and the Irish Comedian of the Year, Patrick Kielty tour support John Meagher was a finalist in the Hackney Empire New Act of The Year, and Leicester Sq Theatre New Comedian of the Year awards. This success has quickly gained John a following for his timely writing and bold performances throughout the UK and abroad.

Working aevery weekend at major UK clubs, John has been leaving audiences in stitches with his upbeat storytelling with big punchlines earning comparisons to comedians such as Billy Connolly, Dave Allen, and Tommy Tiernan.

His has appeared on BBC3, BBC Radio 4extra, andTV3 Ireland.

“…grabbed the gig by the scruff of its neck with a loud, fast and punchy delivery.” – Steve Bennett @ Chortle