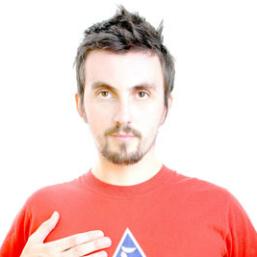 Markus Birdman is a Stand-Up based in London. He performed at the Edinburgh Festival 2001 as part of Screaming Blue Murder's Big Value Show and as a finalist in the televised BBC New Comedy Awards 2001.

He performed at the Edinburgh Festival 2002 as both the compere of Avalon's Comedy Zone, and in Francesca Martinez's (Daily Telegraph Winner 2000) solo show, 'I'm Perfect', which he is also did at the Melbourne Comedy Festival 2003.

Whilst down under, Markus performed at the Sydney Comedy Store.

Markus was recently featured and interviewed on BBC radio London Live, and has appeared on BBC One, BBC Choice and Sky and Triple J Radio, Fox FM and Channel 9 TV in Australia.

As well as being booked for weekends at The Comedy Store, and in most major UK clubs, Markus Birdman headlined on the 2003 Avalon Comedy Network, and will be compering a benefit at The Roundhouse, Camden, alongside, Phil Jupitus, The Blockheads Band and Sting.

"uniquely talented, demonstrates just how it's done." The Evening Standard.
"already on his way up….." Time Out.
"wonderful, extremely versatile." The Scotsman
"One of the millionaire mirth merchants of the future." The Metro.
"The crowd fell for his dry witty, confused little boy smutt-schtick in a big way" The Observer.
"Looks like the 4th Muskateer; infectious, likable and popular with the crowd" The Stage.