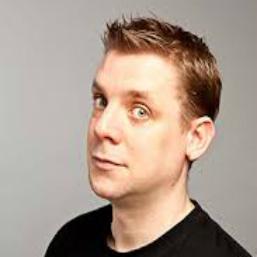 Michael Fabbri quickly stamped his mark on the UK circuit appearing in the 2003 final of Channel 4’s So You Think You’re Funny? and rapidly earned a reputation as one of the most promising up and coming comedians on the circuit. A reputation that he is living up to, regularly performing for the best clubs in the country.

With a dark and honest approach to some of life’s more touchy subjects Fabbri manages to effortlessly slip between some harsh, controversial topics to light-hearted silliness to make for a refreshingly eclectic and brilliantly funny act.

Michael regularly performs for all of the major clubs and promoters on the UK circuit, including:

The Comedy Store, Jongleurs, Komedia, Glee Clubs, The Stand, Up The Creek, 99 Club, Funny Side of Covent Garden, Jesters, Off The Kerb, CKP, Just The Tonic, GSOH and Mirth Control. He also performs at many universities across the UK.

Michael supported Lucy Porter on her national Love In tour in 2008.

Not only popular in the UK, Michael has also performed in Singapore, Dubai, Doha and Abu Dhabi.