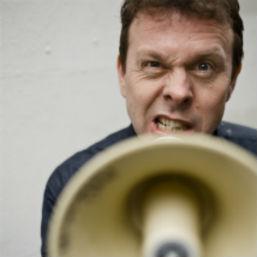 Michael Legge has performed in Edinburgh to great acclaim with shows Free Wifi and What A Shame. His most recent Edinburgh show, Tell It Like It Is, Steve, received 5 Four Star Reviews. He is also a key team member of the award-winning podcast, Do The Right Thing,is part of the sketch group Los Quattros Cvnts and performs regularly with Robin Ince in their show, Righteous Ire, Pointless Anger.

** AWARD-WINNER ** Chortle Best Off Stage Contribution for his infamous blog

"a lightning rod for humiliation and frustration .. The man is hilarious and barking mad. This is a superb hour of comedy ****", The Skinny

"perfectly judged, with some beautifully splenetic turns of phrase", Chortle

"he packs a gag-rate as high as the most prodigious one-liner merchant and also the message not to be a rude, self-absorbed tosser" Chortle

" The show is a must see" on Pointless Anger Righteous Ire, broadwaybaby.com

"One of the hidden gems of the live comedy circuit", The Guardian - Pick of the Week