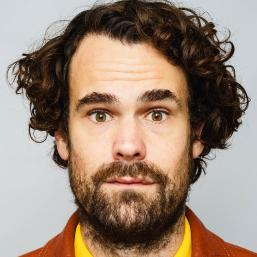 Comedian, actor, writer and self proclaimed fool, Paul F Taylor one is one of those original and distinctive stand-up performers once seen, never forgotten. His unique brand of humour fuses quirky offbeat one liners with surreal and observational flights of fancy to fantastical effect. Offering up a high octane mish mash of unrelenting nonsense, Paul has also toured extensively abroad, entertaining the crowds in Munich, Amsterdam, New York, Prague and Bucharest.

Supporting top acts such as Lucy Porter and Shappi Khorsandi, his charismatic oddball humor has seen him MC’ing at the 2009 Laughter Film Awards and providing warm up for TV shows such as The Week That Wasn’t (Sky) and the Made In Chelsea End Of Season Party (Ch4). He is also one half of successful double act Short & Curly with fellow comic Rebecca Shorrocks.

Crowned NATY New Act Of The Year 2013, and with nominations for Best New Show at Leicester Comedy Festival in 2014 and 2017, his latest abstract offerings are always on the not to be missed list.