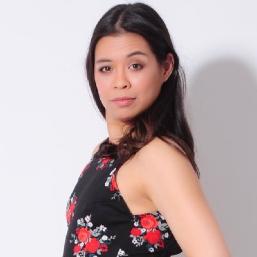 “Lina is a musical comic with a brilliant line in bawdy songs… storming set!” Evening Standard

“I have no doubt she will hold her own so easily that she’ll have a hand free to hold someone else’s too.” The Guardian

“slickly done – there’s no denying that the girl’s got talent” Chortle, the UK Comedy Guide

Winner of the EMMA Award for Best Comedienne 2003, Ria Lina makes an impact with her dry wit and bawdy ukulele songs. Having been a regular in stand-up comedy for the past 10 years both in the UK and abroad, she returns to the circuit after a short family break.

Recent projects include writing for the Ladyboys of Bangkok 2010 “Fantasy & Feathers” tour, and writing/acting for a comedy sketch show for ITV2 (Meet the Blogs).

In the past, Ria has written and presented her own documentary for Channel 4 revealing the truth behind the myths that surround oriental women in Britain; other projects include the comedy series, Malai Monologues, for BBC 3; The World Stands Up, for Comedy Central (USA), the Paramount Comedy Channel (UK), and the Comedy Network Channel (AUS); and Sweet n’ Sour Comedy Sketch Show for BBC3.