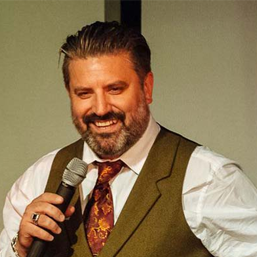 Rich Wilson has loved comedy ever since his older nextdoor neighbour gave him a cassette of Eddie Murphy-Delirious."It was the most mind blowing thing I'd ever heard.My young ears had never heard language like it." His comedy asperations lay dorment until he got a job as a barman at a comedy club in Greenwich,South London,called Up The Creek. "It was the most amazing job ever.I was in awe of the comics that appeared every weekend." After getting friendly with a few of the comics,a couple of them suggested that he should give comedy a go himself and so in October of 2004,Rich took his first tentative steps out onto the comedy circuit at a club called The Bullingdon. "I was booked to do five minutes and I managed about two and a half before I legged it. I've never known fear like it." Since then Rich hasn't looked back.He is a regular at all the major comedy clubs up and down the country including Jongleurs,The Comedy Cafe and The Big Night Out,to name but a few.