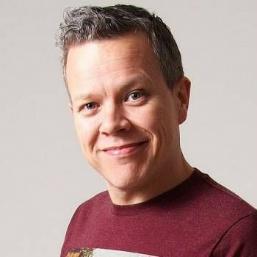 Rob Deering performs stand-up comedy with music, using a guitar, a loop pedal and his voice to create impressive rock and pop soundscapes – and do jokes, of course.

Along with being one of the most in-demand headliners on the UK circuit, he’s toured nationally and performed solo shows at the Edinburgh Fringe many times since starting out in comedy in the year 2000. His late-night, live-music comedy pop quiz Beat This is a festival institution, on London’s South Bank, at Wales’ Green Man and many more besides Edinburgh.

Rob has performed throughout the world, in shows from the Middle East to Melbourne, Shanghai to the South of France, and he has appeared on any number of Radio and TV shows, often using his extensive knowledge of film, popular music and… well, ‘general’; he has won Celebrity Mastermind and a comedians’ special of the Weakest Link on BBC One, for example.