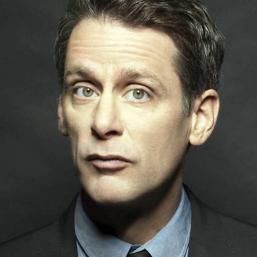 Camp and outrageous, provocative and controversial, catty and hysterical, Scott Capurro is a breath of fresh air in the increasingly samey and stale world of stand-up.

Constantly operating on the boundaries of good taste ­ and often straying some way over the line ­ Scott is a challenging comedian in the best sense of the word. He is so comfortable dealing with topics that other comics would never touch that he forces audiences to ask themselves why they should feel so uncomfortable about some of his subject matter. Yet despite this approach ­ or perhaps even because of it ­ Scott has established himself as one of the most popular faces in the UK comedy circuit.

Since his award-winning solo debut at the 1994 Edinburgh Fringe Festival, Capurro has become a regular Fringe favourite. Constantly seeking to challenge himself as well as his audience, he has since returned with several solo Fringe shows and experimented with a variety of forms and styles, including his dark 1998 one-man play, Brian Souffle, and his infamous 2001 collaboration with John Cardone, Fucking Our Fathers.

Following his Fringe successes, Scott has taken his shows to the Melbourne Comedy Festival, the Montreal Just For Laughs Festival, the Sydney Mardi Gras and has toured throughout Australia and the UK. Treading new ground yet again, Scott published his first novel, Fowl Play in September 1999, following his highly successful Edinburgh show of the same name.

Scott is a veteran of our TV screens – he has appeared on such shows as BBC1’s The Stand-Up Show, hosted Is That It? for MAI United, and captained a team on the Channel 4 quiz The Staying In Show. A diverse performer, Scott’s talents were also incorporated into Star Wars Episode One: The Phantom Menace!

In 2002, he presented a light-hearted documentary on the UK’s Channel 4 called The Truth About Gay Animals which examined the subject of homosexuality in animals. Capurro visited various collections of captive animals to observe animals which had been reported to exhibit homosexual behaviour, and interviewed the staff about this. The show also included an interview with anti-gay rights campaigner and politician, Janet Young, where Capurro showed Young a video of a variety of male-male intercourse and female-female mating attempts in various animal species, and then asked her to comment on whether this influenced her views about its “unnaturalness”.

From May to June 2008, he acted the role of Sammy in Joe DiPietro’s play ‘Fucking Men’ in London, England.