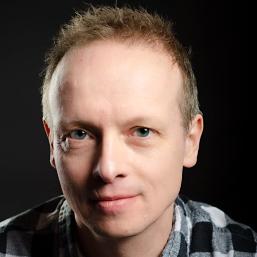 "One of the best…brilliant " Independent

"Comedy vision that can see round corners ★★★★★" Chortle

Stephen Grant is one of the UK’s funniest, hardest working and most respected comedians. Whether entertaining full-size theatres, voicing animations, warming up TV audiences, presenting radio shows or hosting corporate award nights Stephen never fails to pull in the laughs.

Stephen is a multi-award winning MC and the most experienced late show compere in the UK due to his 23 year residency at the Krater Comedy Club. He performs at clubs and corporate events all over the UK and on the international circuit and has taken six critically acclaimed shows to the Edinburgh Fringe since 2003.

A repeat award winner of Best UK Compere, Stephen Grant is one of the hardest working comedy performers and writers in the UK. He was the host of the Krater Comedy Club at Komedia between 1999 and 2022, which won Best Comedy Venue in the South for an unprecedented amount of times.

As a performer, Stephen is a regular headliner at The Comedy Store in Leicester Square. He possesses an energy and intellect which combined with his eight years in the corporate world make for a perfect experienced host and entertainer for any event. Clients often return to Stephen for repeat engagements due to his ability to vary his content and material, often tailoring it specific to the client’s requirements and industry.

“Grant, whose regular slot at the Brighton Komedia Club has earned him a cult status, is an engaging host and an easy person to spend an hour with.” The Independent

Stephen still finds the time to headline and MC gigs all over the country. His speed and dynamism create a magical energy which has audiences rapt and hanging onto his every word. As a writer, Stephen has written on TV shows from Mock the Week to Live at the Electric as well as for Lee Nelson’s Well Good Show and Channel 4’s Stand Up For The Week.

As a writer of Live shows, Stephen has written, directed and script edited on over 120 different shows for over 50 different comedians, and is probably Britain’s number 1 director of stand up comedy.