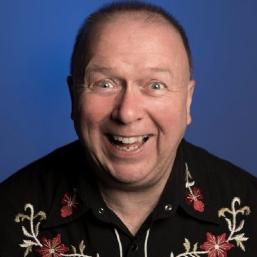 A highly refreshing and original comic with a gift for sharp observations and up-to-the-minute political asides. With more energy than a friendly Tasmanian devil, this animated comedian tells jokes, plays the guitar and sings lyrics. Hilarious!

Satirical songs are hard to pull off successfully, but if anyone can do it, Steve Gribbin can. In fact, he pulls it off with real aplomb.

You can count the number of truly imaginative comic singers currently on the circuit on the fingers of one hand. One of this select band is Steve Gribbin.

Steve Gribbin is a diminutive guitar-wielding satirist from Liverpool, whose comedy songs and off the wall observations have made him one of the firm favourites of the comedy circuit.

Always expect a unique show, as Steve rips apart whatever topics are current and have been in the news that week.

As one half of Skint Video, they performed at many festivals throughout the early 1990s and also starred on countless television programmes such as Saturday Live. Their radio credits include The Mary Whitehouse Experience, and their own show Songlines on Radio One.

Since branching out on his own, professional Scouser Steve has continued to keep his feet firmly in both camps. A great musician, his songs are exactly that, combining razor sharp lyrics with catchy tunes and devastatingly funny humour.

Steve has appeared at countless Comedy and Music Festivals, from the Edinburgh Fringe Festival to Glastonbury and everywhere in-between including two full-length one-man shows at the Edinburgh Festival, Natural Born Kidder in 1995 and I’m Turning Into My Dad! in 1999.