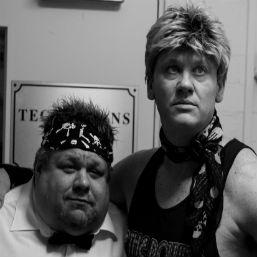 The Two Johns, Terry Alderton and Johnny Spurling have been independently treading the boards for over 25 years. A few years ago they decided to come together to create The Two Johns. Initially the Johns came about as a support act for Terry's solo stand up show, and in no time at all they were established as an act in their own right.

Now they have played to many great theatres and comedy clubs including The Bloomsbury Theatre, The London Palladium, Comedy Store, Ronnie Scotts and many more. The Johns is an original musical comedy double act that defies comedy convention. They break all the rules and push it (whatever 'it' is) past the limit.

Mad, Funny and Dangerous, the Johns take no prisoners. It's fair to say if you're easily offended, perhaps stay away, cos 'We are Johns!'

"Hinge and Bracket on Acid!"